This hole is located 10 meters downward, allowing more driving distance. Flowers in front of the tee-ground lets players begin the course with a fresh start. Players are easy to perform a par. 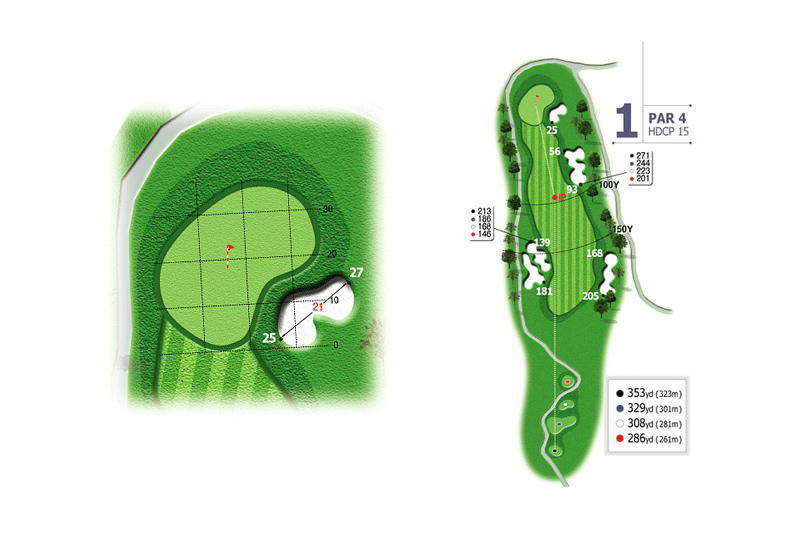 Hole 2 is a dogleg hole to the left, allowing an aggressive approach from the intersection point. The forward bunker elevates the level of difficulty and once on it, the second shot becomes easier for the player. Although it is a long par-5 hole, a two on green is possible for active players. At the same time, however, players can end up in a double bogey. 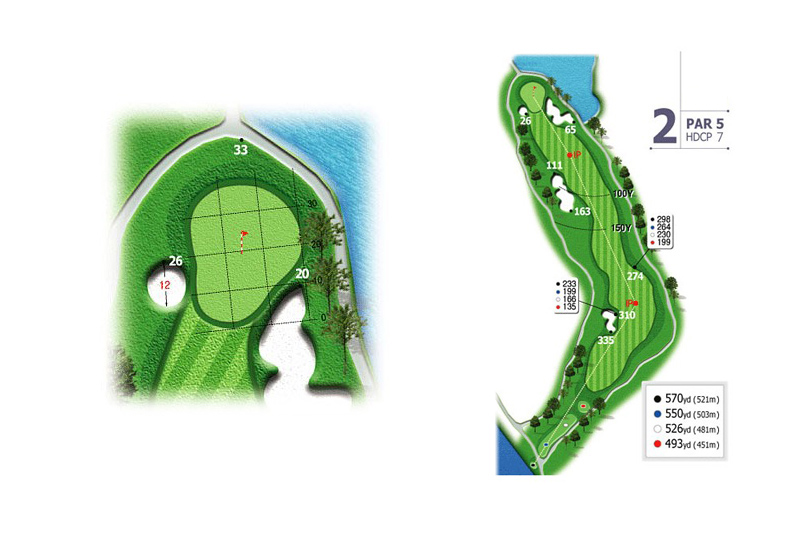 This hole requires a precise tee-shot. The wind from the coast may affect the leg position to send the ball to the righthand water hazard. A precise and safe play is recommended considering the hazards. 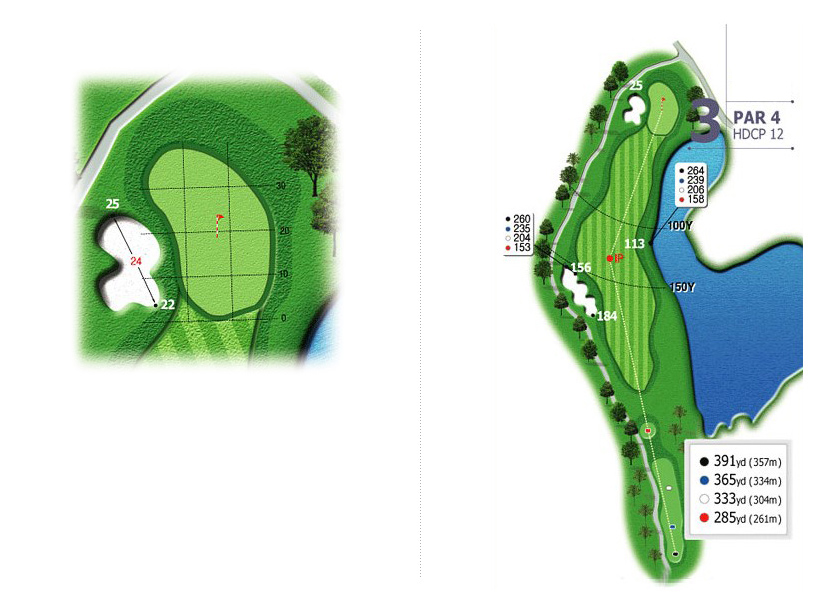 This course represents the scenic beauty of Ananti Namhae’s golf course. This hole was set by carving rocks to fully utilize its original landscape. It is surrounded by such carved rocks behind the green. The hole may seem complex as players will need to send the ball across the body of water. However, playing to get to the green that seems to be floating on water endows indeed an impressive experience. Precise views will allow players smooth on the green. 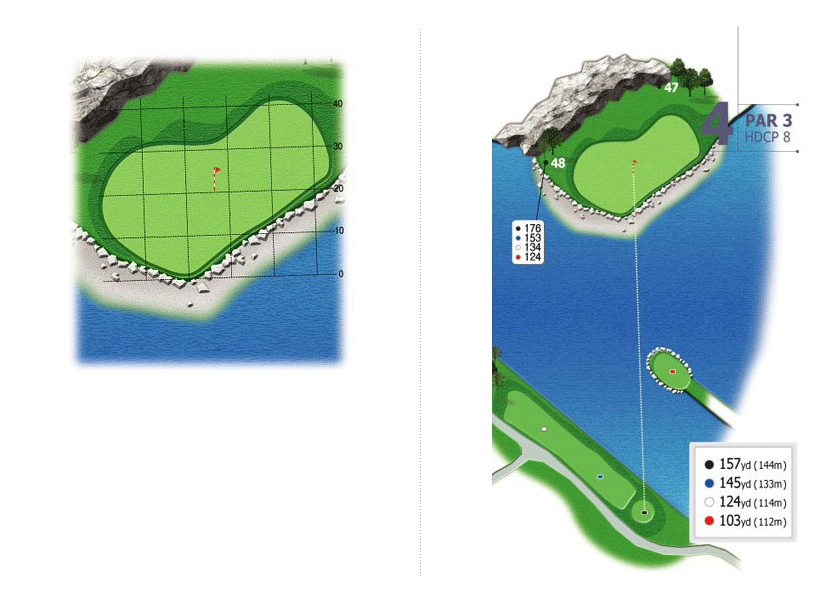 It is a long hole with a terraced tee. Golfers that perform a long shot can easily achieve a two-on across the hazard. Furthermore, players that enjoy angled shots may also achieve an eagle. 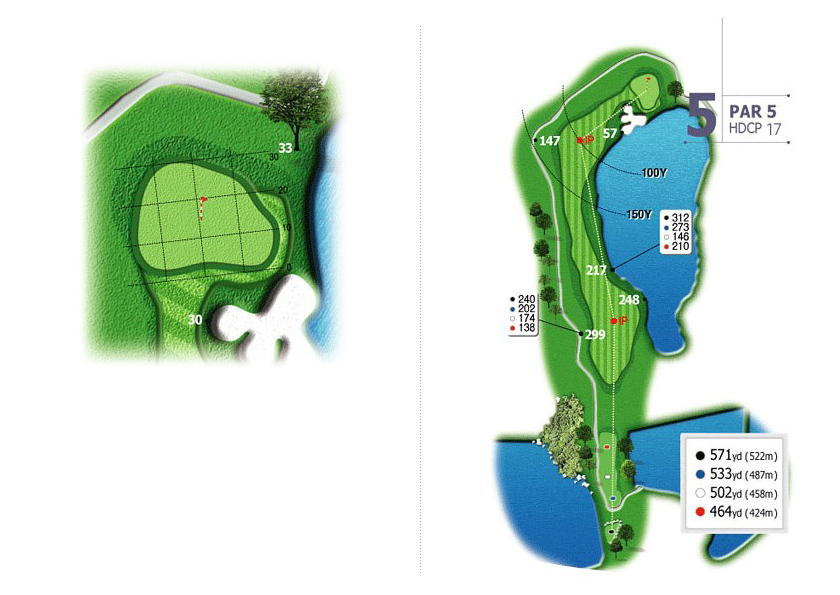 It carries a waterfall in front of the tee showcasing a natural rainbow over the water fog. Players, however, may find the water hazards up to the righthand green and bunkers around the green challenging. 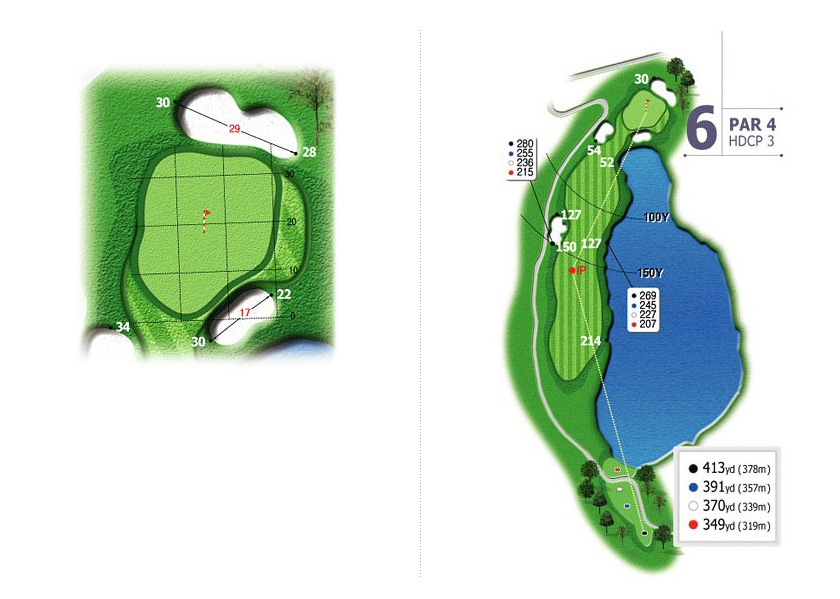 It is another challenging par-3 as players need to send the ball across 140-meters over the sea. Second shots are made to be easier by extending the hole’s apron and a wider view on the right side has been secured to prevent slices. Precise views of the distance allow an on-green. 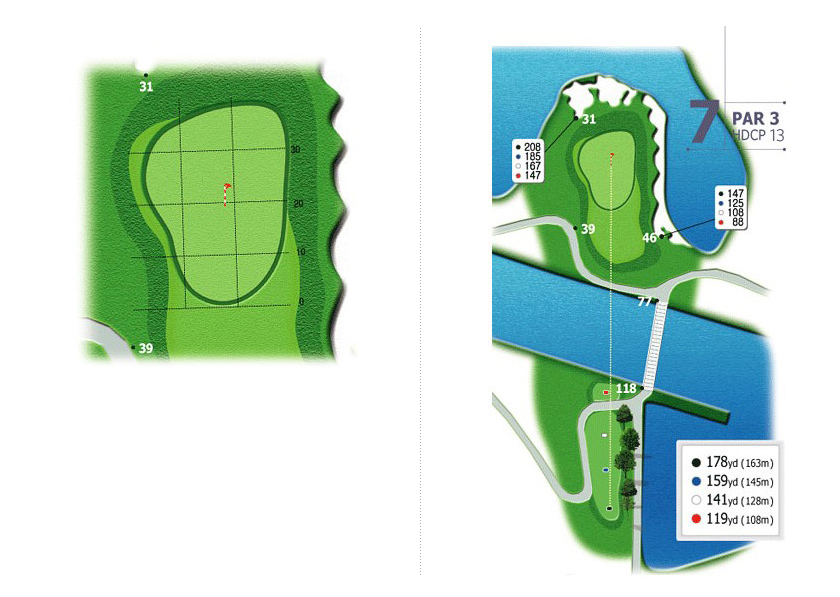 A two-on can be challenging due to the water hazards and large-scale bunkers near the intersection point and green. However, golfer that enjoy aggressive and precise shots can reduces his or her scores. 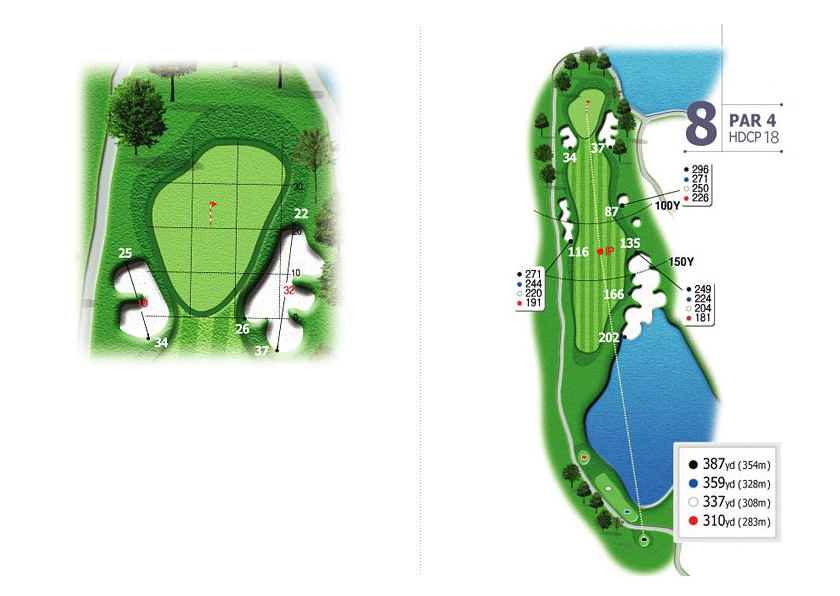 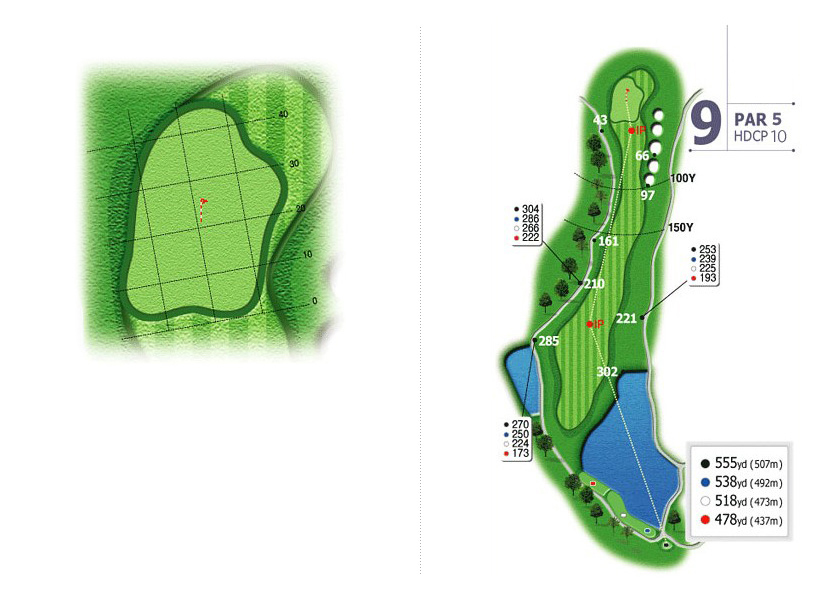 Players can enjoy a panoramic view of the 80 acres of green, sea, and mountains from the tee ground. It is also famous among fellow golfers from both in and out of Korea. 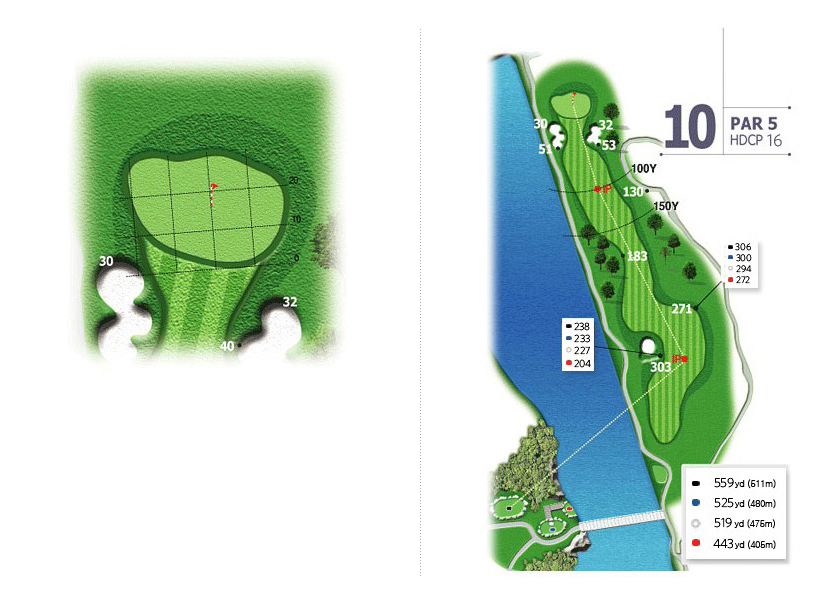 On the right of this hole are massive fields of reeds. Its narrow fairway and water hazards on the right side of the green can be challenging. However, settling the ball on the long and wide landing zone can allow a two on green. 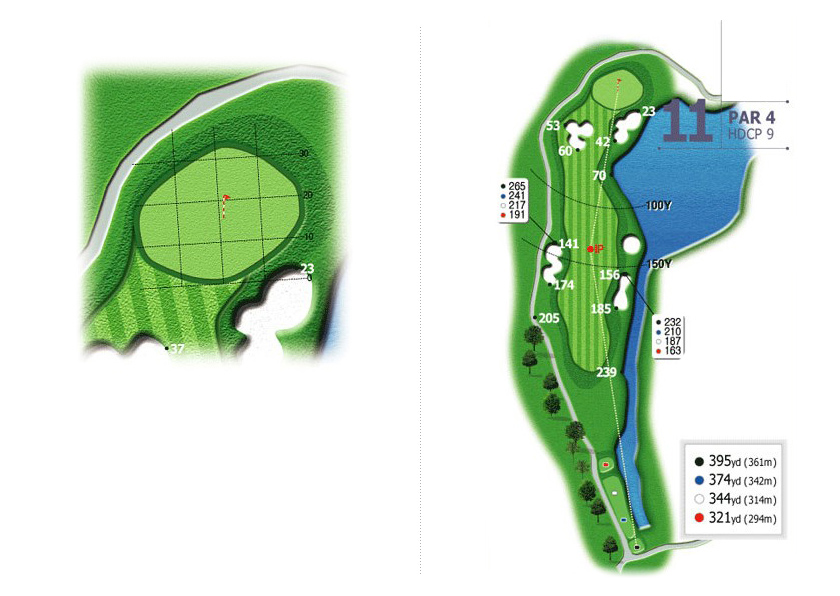 It is characterized by its dogleg to the left and a large intersection between the right and left slopes with complex views. There is also a risk of slices due to a creek on the right side of the landing zone. Once the ball is near the intersection point, following shots and approaches to the green become easier. 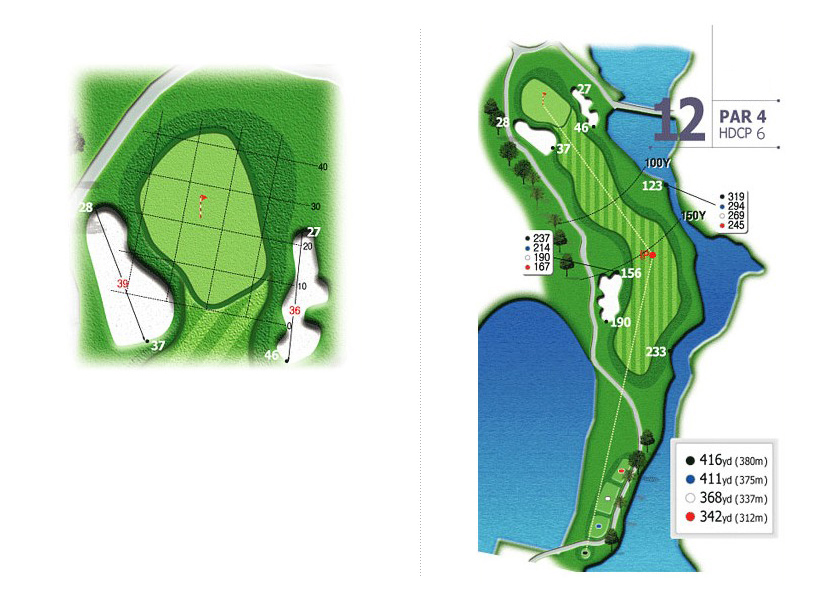 This hole gives far view of the coast and can be affected by winds. 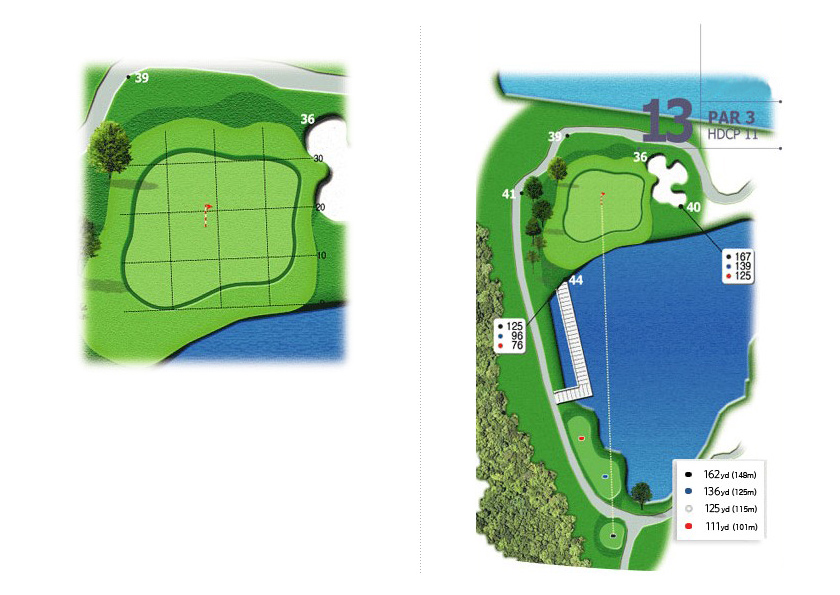 Although Hole 14 is next to the coastline, its wide fairway and green prevent risks from the wind. It has the highest handicap in the course. However, a smooth play is possible considering the wind. It is also recommended that players take a break at Cloud 19 nearby. 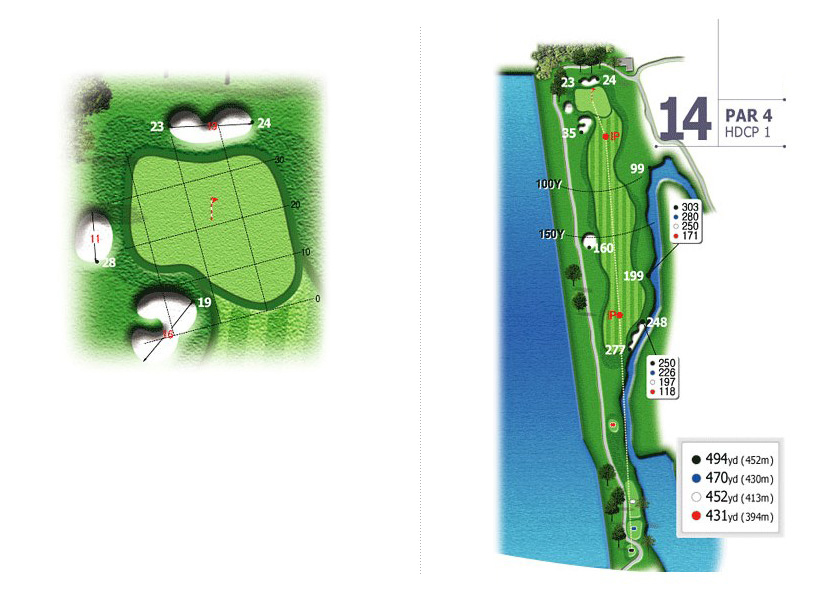 This hole’s white beach bunker surrounding the hole and green displays an amazing landscape. Games scores can be overturned by how safely the tee-shots are settled on the landing zone. A two-on is possible when tee-shots are settled. However, a short tee-shot can be affected by the nearby hazard making a par even more difficult. 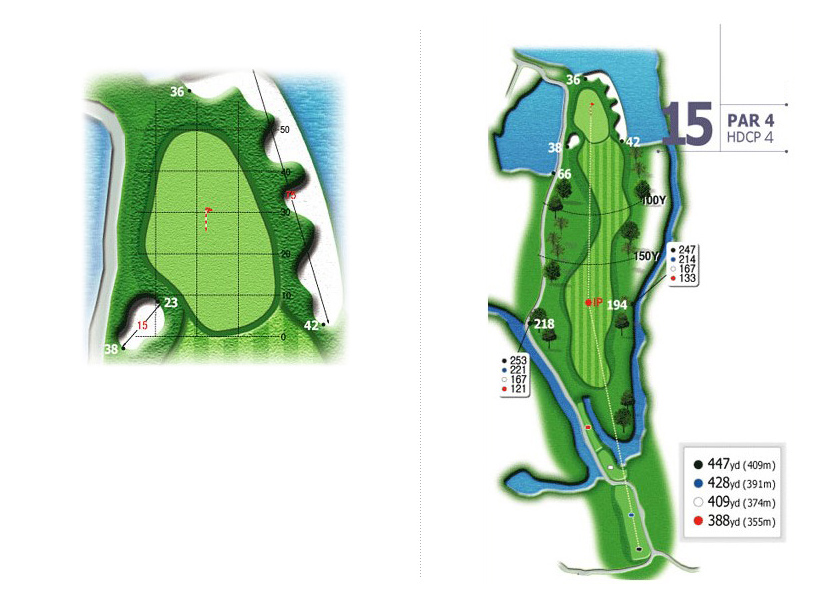 This hole has a large and wide green, allowing players to easily decide their next steps. However, the bunkers around the green can be challenging. The bunker in front is large and shallow and the one behind is located in front of a crater like mound. 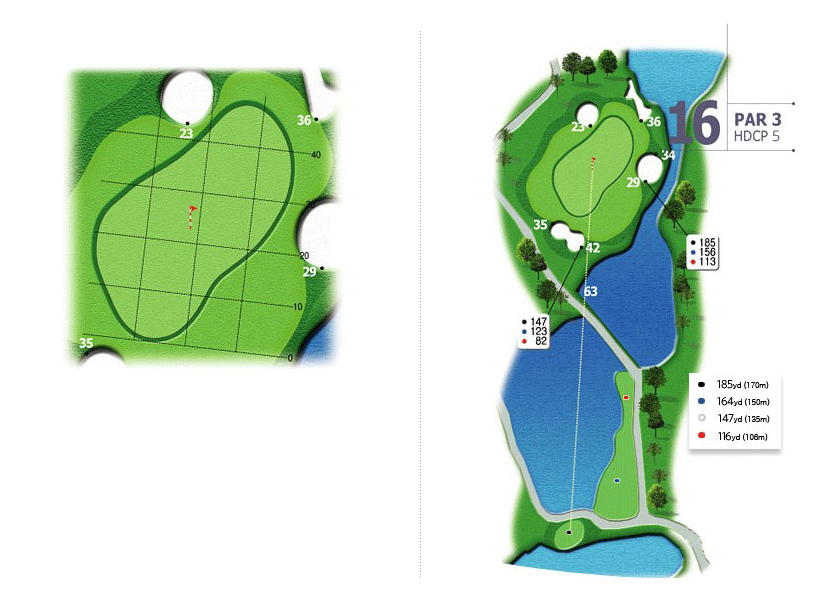 It is a regular par 5 hole with a length of 467 meter from the tee. Its elevated green across the wide pond on the left can be a big risk when players take an aggressive shot and the porbunker in front of the green is also risky to players that boasts long shots. This hole requires precision from the first landing zone when approaching the green. 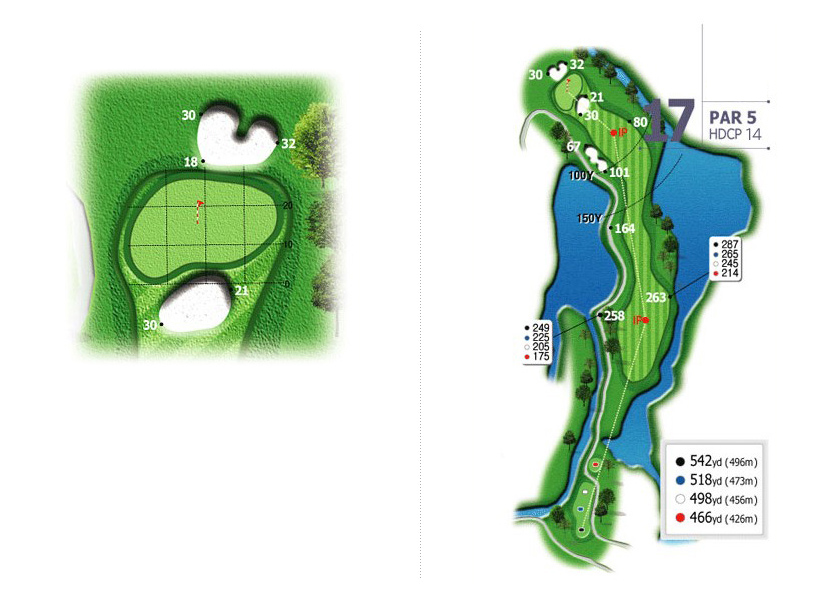 This last hole in the course differentiates itself from other holes. It allows a smooth play on the green and nearby. However, it is difficult to evaluate its green in front of the intersection point and the height of the bunker can be challenging. Hence, extra efforts are necessary to reduce the number shots on the tee ground. 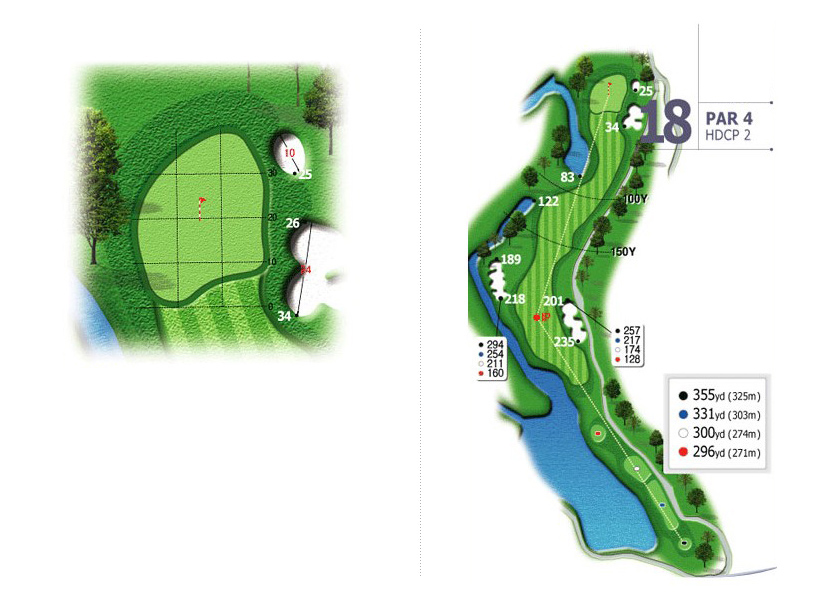